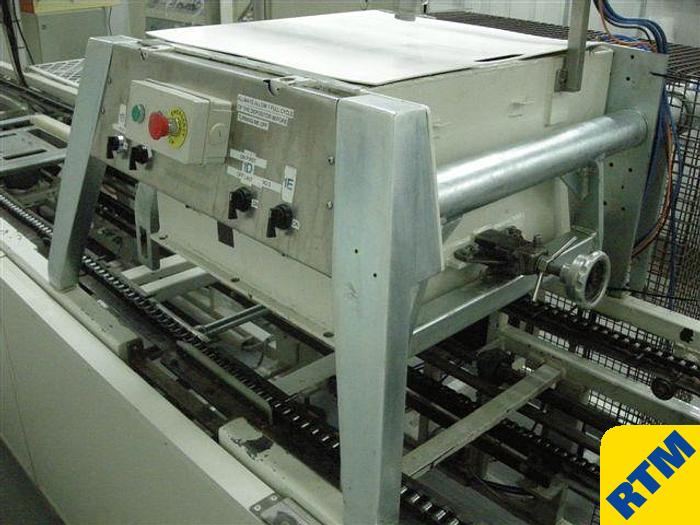 Pulling down the line to every last bolt and checked all bearings, etc. and replaced any which were not 100%. Rebuilt all worn shafts cams, etc. and wire brushed or soda blasted all metal parts that were not painted and reassembled. This was very extensive. Also totally reconditioned the depositor end including the mould closer and repainted /plated most parts. All electrical field wiring was replaced and any control gear not deemed to be reliable. All the insulated panel doors and enclosure were replaced with new panels, hinges and latches. Moulding Line includes electrical wiring diagrams.

2011 - Replaced the mould closer pneumatic logic controls with a plc controller and new valves which proved a lot more reliable.

Also put a plc control on the demoulding hammers.

The line measures 26 metres long plus an extra 4.5m for the outfeed conveyor, egg sieve,

The moulding line has capacity for 600 moulds but only includes around 400 book mould carriers.

The line consists of :

Line was producing about 230-250 Kg/hour on 7gramme eggs in either compound or chocolate.

Also with this line are numerous other moulds and depositor plates, and two extra Depositors (one is a one shot and the other is one sided) which are currently in storage. The one shot one has larger pistons than the one currently fitted to the line, and includes a depositor plate and some moulds for this for doing a 30gramme filled egg.

The moulding plant has its own evaporator on the roof of the building but does not have its own condensing unit as it is run off the factory compressor rack.